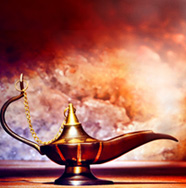 In my work with teens, I’ve met with a number of sullen, angry faces, seemingly impermeable to any effort on the part of an adult to reach them. Then I tell them this story, and sometimes, SOMETIMES, a little light shows through. The story is this:

A man was walking along the beach when he spied a brass lantern at the shoreline. Knowing what would of course come next, he pried it from the sand and rubbed it, then waited for his wishes. True to form, a large blue genie appeared, but then roared instead, “I’m going to kill you now.” Our intrepid brass-polisher was taken aback for a moment, then recalled his consumer rights, and retorted, “You’re supposed to give me three wishes.” “Well, I would have, if you’d rescued me the first thousand years. If you’d rescued me the next thousand years, I would have given you ten times that amount. But you’ve kept me waiting so long, that now all I want to do is destroy you.”

Even as wounded teens, we can experience pain without redress, and carry it for so long that, when help finally comes, it can feel as if it’s too late. Even those who come into my office, expecting to be helped, often unearth a side to themselves that believes they are too damaged, that the work will take too long. Conventional science added to this voice. For a long time, it was believed that change past a certain critical age, as young as 15, was unlikely, and that the best we can hope for is to cope with our brokenness. As a peer counselor for a domestic violence hotline a quarter century ago, I learned the phrase “maintenance issue,” to describe the upkeep of trauma that would never go away, allowing the formerly abused to reduce further risk and lead a minimally effective life.

How depressing! And how wrong. In the last twenty years, neuroscientists have explored extensively what is termed “brain plasticity,” or neuroplasticity, indicating that the brain, and its extension, the spinal cord, are capable of rewiring, or rather, accessing the billions of unused neurons to create new pathways, regardless of the number of years we’ve spent cooped up in the lantern. The work is not passive, nor is it easy. A wonderful colleague of mine, Karen, does regular workshops for employees in the parole and probation offices. She starts her workshops by telling the participants to switch chairs. They grumble, betraying sullen inner teens, and ultimately comply, only to be directed, once settled, to switch back. Faced now with forty fuming correction officers, Karen then turns the tables: “we tell our clients every day to change their LIVES, and we complain about changing our seats.”

Not all my clients are willing to do the work. After all, Western medicine is a passive model of healing: get diagnosed, get medicated,and expect fairly immediate results. And I get it: change is difficult. But I’ve also seen the end result, clients who not only think differently, but fully experience their lives in a different way, from the literal core of their bodies out. Change happens.

By the way, the intrepid brass-polisher lived. Anyone who’s worked with or successfully raised an adolescent knows how. He just bet the genie he couldn’t get back in the lamp.

EXERCISE: we all have habits. Notice yours. The place on the couch that is “yours”, the morning and evening rituals. Pick one element,and change it; for example, take a different route to work. Notice any resistance to even doing the exercise, and in doing it, any increase or decrease in your energy. Consider taking out some
habitual behaviors altogether. What happens?

4/13/2013
Most of the things you mention happens to be supprisingly legitimate and that makes me ponder the reason why I hadn’t looked at this with this light before. Your article really did turn the light on for me personally as far as this issue goes. But there is actually one particular point I am not too cozy with so while I try to reconcile that with the central idea of the position, allow me see just what the rest of the readers have to say. Well done.

4/26/2013
There is visibly a bunch to identify about this. I believe you made various nice points in features also.