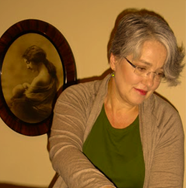 A young woman’s head is cradled in my hands, and she is crying over something she does not understand. Referred by a psychotherapist colleague of mine, she expressed herself tentatively when we first met. In her voice, the sound of a child: fear. She is not used to bodywork, but trusts her therapist. My colleague hasn’t filled me in on her issues, nor have I asked.

She lies down on my table. Using craniosacral techniques, I apply gentle pressure to various areas of her body, finally holding her head in my hands, fingertips firmly pressed against the back of her skull. She begins to weep. She doesn’t know why, and it bothers her until I assure her that it doesn’t matter. It is simply energy, and she’s allowing it to pass. She’s comforted.

The next day, my colleague reports to me. She has been working with the woman and her husband for a while. When the woman came for her appointment earlier that day, her therapist noticed a significant change: openness, a lightness, a sense of relief.

To Touch or Not?

My colleague and I are part of an emerging group of clinicians…psychologists, social workers, counselors…who not only acknowledge the value of touch in the healing of emotional distress and the service of mental health issues, such as trauma and depression. We actively engage it.

Despite what many acknowledge, and what I both know and have experienced, I feel a profound hesitation in this work. I don’t feel like a rebel. I feel, at times, like I’m violating a taboo.

While touch has been subject to many taboos, the prohibition against psychotherapeutic touch began with the “father” of psychoanalysis himself, Sigmund Freud. Freud was convinced that touch could only lead to further neurosis. Meninger, a prime influence in mid-century America, asserted that only incompetence or covert seduction would allow a therapist to touch a patient. When I was interning at a local AIDS organization, the social work supervisor point-blank told me that there was no way I could combine the two.

There is an argument for this. Quit simply, it can leave the client feeling, well overexposed. To allow the therapist past physical boundaries is to invite an intimacy that replicates the parent/enfant bond. In the case of clients with significant emotional disturbance, the boundaries between therapist and client can be even thinner, or nonexistent. That, coupled with the psychological honesty essential to effective therapy, can be overwhelming.

There are recognized forms of psychotherapy that engage the client physically; however, when and if touch is applied, it is to support the client in attaining the correct therapeutic position. The client, for the most part, is still separate from the therapist. A far cry from the cradling of bodies and infusion of compassionate energy that describe more profound bodywork. And while most therapists today would concede the healing value of touch, the ethics around its inclusion in practice are still vague, and the insurance liability concerns are great. More than these, however, are the licensing boards who, in most instances, specifically forbid physical contact between therapist and client.

Whom do therapists call to fill the gap?

Approximately 200 of us, primarily massage and occupational therapists, have gathered at a resort far outside of Austin in anticipation of learning a new technique, one which will allow us to identify and release traumatic energy. Despite the substantial outlay of time and money, we are cautious. One by one, as we introduce ourselves, the concern is echoed: “what if I do this work and someone falls apart on the table?” It is the most pervasive fear. For the next three days, we scramble mightily to apply new knowledge to each others’ old wounds. Given my background, I find myself coaching as much as learning, as a strange anger takes hold of me.

When psychotherapists, who spend years learning how to evince and process emotions, can’t touch, and massage therapists must clamber for the right words, what is the client who truly wants to heal, from the core out, to do?

This series is as much for me as for the reader. I’ll be talking with therapists who challenge the status quo, as well as instructors and schools in how, if at all, they address the prospect of emotional release. As in Overcoming Table Terror, a CEU course I offer massage therapists, I’ll be covering the gamut, from trauma and “body memory” to a host of practical responses to the traumatized client. I invite those of you who also have thoughts on this to contact me, as I follow this exploration to a desired conclusion: if not an answer, at least a clearer vision of healing for the 21st century.