My twenty years as a licensed psychotherapist and massage therapist have taught me many things about both trauma and its impact on our relationships. Some of the workshops are specifically for colleagues, particularly relating to the use of touch; many are for the general public. Most are free, as I believe that a world less stuck in trauma is a safer, more lively one for us all. Hope you find one that helps, and if you see one that’s already passed, stay tuned…I’ll probably hold it again.

“Sally” is an ordinary woman…on the surface. She presents herself well, and if you didn’t know better, you’d think she was confident and capable. 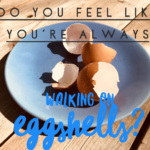 Underneath, though, she’s filled with self-doubt. She bites her tongue to keep from showing others what she feels…because she knows they’d just ridicule her, or make it about them instead. She’s wary of the first sign of distress in someone else, because it just might end up in them exploding in a fit of rage. She’s terrified of conflict, because she’ll just end up being attacked, being wrong.

The worst thing is, though, that she doesn’t know who she is. She doesn’t even know that it’s ok to answer that question, or live in accordance with her own needs and values.

Sally is a woman walking on eggshells!

Impact of being raised by someone with Borderline or Narcissistic PD

Having a parent with Borderline Personality Disorder, or BPD, or with Narcissistic Personality Disorder, or NPD, isn’t always easy to identify. Particularly if you’re the child of one. You long ago learned to agree completely, in order to maintain the peace, because those with the illness and no willingness to change (why should they, it’s everyone else’s fault!) experience disagreement as rejection. In their world, the other is all-good, or all-bad. Anyone in their lives can tell you, they’re never quite sure when the switch gets flipped, and suddenly the exciting flow of attention and admiration gets cut off, leaving you cold and alone, prey to the hostility that follows.

If you’re someone raised by a parent or other caregiver with BPD or NPD, you might well be convinced that they are right. As you look around, you feel how foreign you are from others who aren’t constantly second-guessing themselves, who are at ease with being less-than-perfect, and comfortable in relationships where they can let themselves be themselves. Your shame might even convince you not to talk about it because of course no one will understand.

Except for others raised by those with BPD/NPD.

Imagine getting together in a group, debunking the lies you learned about your selves and the world. Sharing the risk of removing the mask you’ve built, and instead recognizing that not only are those around you more wonderful as their authentic selves…so are you. Stepping out of the old “normal” into a new one, where mistakes are made, and repaired; distress seen with compassion and given comfort; conflict is practiced with ever-increasing confidence, no longer about attack and defend but about emerging understanding, honesty and mutual care.

I began this group in 2018, not knowing if it would be truly helpful. Three groups–“generations,” I call them–have trusted me to lead them through a process I developed after years of working with individual clients struggling just as my composite “Sally”. We’ve addressed the issues of how securely (or not) we connect to others, our boundaries (or lack thereof), and our capacity to get and stay connected to ourselves while reaching out for others. We address perfectionism and sibling and other close relationships, and how (or if) to forgive our parents. Somatically based, people are encouraged to get and stay in their bodies, supporting a healthier nervous system. Each group is structured, with an exercise to go with each topic, and some room at the end for processing. Each module is 6 months of 2 hours one time per month, and the fee is a sliding scale of $40-60 per group. I must meet with potential members prior to admission to the group, and hold free initial discussions 3 times a year to see if the group would serve your needs. The group, once set at a maximum of 7 members, becomes closed after the first session, and therefore requires a commitment.

“It turned out to be one of the most healing acts of self care I had ever experienced!..to be surrounded by a rainbow of people so different than you and talk about such strikingly similar experiences. It was nourishing, eye opening and therapeutic.” -RQ, father with NPD

“Though I thought I knew a lot about the borderline environment, there were many aspects of my experience that I did not relate to (my upbringing) until I saw in our group all the heads nodding in understanding or the outbursts of shared laughter as identification with whatever was being discussed. It was most eye-opening to see the kind of things that we all shared–that was very personally reassuring, especially given that a key component of the borderline upbringing is the crazy-making aspects that make you doubt your own perceptions.” –SB, mother with BPD

If you can’t make it, but recognize that you’re experiencing the impact such a parent can have, I urge you to reach out. Sadly, it’s estimated that 2% of the population, many of whom are raising children, suffer from this illness…and without help and support, the damage perpetuates. Let’s make it end here!

Dates for next group

Next free discussions: Saturday, September 5, 11 am. NOTE: ALL ATTENDEES MUST WEAR A MASK AT ALL TIMES.

Psychoeducation and Experiential Group starting September, meeting monthly on the last Saturday, 11 am, maximum of seven: must attend one of the two discussions above previously. NOTE: UNTIL GOVERNMENTAL POLICIES CHANGE, ALL ATTENDEES MUST WEAR A MASK AT ALL TIMES.

Additional psychoeducation group starting in 2021: TBD, meeting monthly on the first Saturday, 11 am, maximum of seven.

Process Group: for those who have completed the first module: Either Tuesday or Wednesday evening, 6 pm, TBD (also see FaceBook Group)