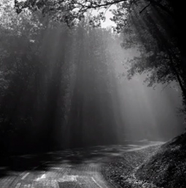 While some of us enter the wilds of the ecotone freely and of our own will, others get backed into it. Perhaps a little bit of off-roading at first, and before we know it, we’re hacking our way through the underbrush. Example: twenty years ago, I’m sitting in a friend’s Denver apartment. She’s a social worker, I’m committed to taking the same route, but we’re not above hobnobbing with other disciplines. In this case, a massage therapist, who enters the apartment and is clearly flustered. Between panicked breaths, she declares that one of her clients fell apart on her table; after an hour of scrambling to help this woman, she’s hysterical herself. She’s here to ask us: what happened? And more, how do I recover from this?

This event bred an early commitment in me to better prepare massage therapists for the abreaction my acquaintance backed into. An emotional reaction against a stimulus, abreactions are different from emotional releases. They often replay some previous trauma, a chance touch to a specific part of the body resulting in a recall of some childhood abuse which, if mishandled by the therapist, can further the client’s distress. Sometimes, it’s dramatic, with the client regressing to a young age. Usually, it’s less identifiable. A few years back, a woman came to me with gift certificate in hand, her friend believing that a massage would relax her obvious tension. I proceeded with my gentlest techniques, but despite responding to prompts to “breath deeply”, it was clear that she was becoming, in fact, increasingly uncomfortable. It was only in hindsite that I realized that, for her, any touch without effective support only drove her aversion in deeper.

Perhaps it was the promise I silently made twenty years ago, or the guilt I felt at failing this client, but recently I became a massage therapy instructor, with the specific intention of making those supportive skills available to any LMT interested in serving those whose damage is more than skin-deep. Usually, it’s a small group who meets in my office a few times a year. Each has had her share of experiences, and the six hours are as much about exploring these experiences as they are about the skills and resources I impart. In the interest of any massage therapist who experiences a similar predicament, these are some of the elements to keep in mind:

The body truly does store emotional information, as well as memories. Recent findings about the brain, the autonomic nervous system, neuropeptides, even components of our collegen, all go towards explaining in tangible terms not only how trauma is stored but the most effective ways to release it. To not only understand this, but explain it clearly to clients, demystifies the process and often removes long-held shame for their seemingly unreasonable reactions. The relationship between therapist and client can be the primary healing tool. When the client feels safe and that she or he is truly cared for, that the session will be more fruitful. Finding new ways to communicate that care, and to use our powers of observation to pick up on potential issues before they show up on the table does much to keep the work, and the practitioner, grounded. The massage therapist who comes from a position of strength, and can form a strong container for the client, is more likely to avoid burnout as well as formulate safe space. Some of my most valuable time during the workshop is helping the students to strengthen their own boundaries, so that they do not become lost in clients who are themselves splintered. Knowing how to identify an abreaction at any stage, from mild to dissociative, and to know how to respond effectively, doesn’t stop at the office door. We can empower our clients with tools for self-care. Healing also involves the accessing of many resources, the support of each other, and the imperative to be knowledgeable about and to turn to complimentary fields for both ourselves and our clients.

Without the ability to share vulnerability, we lead lives confounded by loneliness.

History can be rewritten. Recently, I had the honor of working with a man who experienced considerable trauma during his childhood, and during his sessions, experienced both release and abreaction. His trembling body was frightening to him, and this, as well as his tears, resulted in an all-too-common abreaction: he turned away from me and covered his face. In his family, the show of any emotion was not tolerated. Gently, I encouraged him to look at me, and gradually, session after session, he was able to connect to me in his distress, to share it with me without shame. Without this ability to share vulnerability, we lead lives confounded by loneliness; with it, we gain more than the release of old pain, we gain a path to each other. Since I began giving this workshop a little over a year ago, I’ve been privileged to encounter some wonderful therapists, and it excites me that their work has deepened, allowing not only them, but their clients, a profound opportunity to form more meaningful and satisfying connections, and to move with greater confidence beyond the realm of clinician to that of healer…with the beginnings of a map to the ecotone.