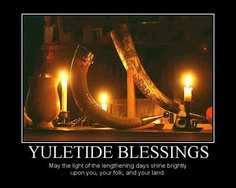 Gut Yule! Did you know that the date set for Christmas was actually an act of conciliation? It seems strange to me that at this time of the year, there’s so much tension about what we’re celebrating, when in one form or another, we’re all celebrating the light.

According to some historians, the first Christians to venture into what is now the British Isles discovered that the nature-loving folks on that island we now refer to as Pagans had a wonderful celebration on the Winter Solstice, honoring the rebirth of the Great Horned God. Yule itself has Germanic origins, and involved a weeks’-long revelry celebrating the uber-god, Odin. Instead of demanding that these people give up their current beliefs, the Christians wisely said, here’s our version of God, let’s include him.  Cooperation, what a concept.

Think of it. The census for which Joseph and Mary supposedly traveled back to Bethlehem occurred at a time of the year when travel was easiest, around July (named for Julius Caesar). That would make Jesus a Cancer, or more likely, a Leo. Those proselytizing Christians could have been hard-nosed, and insisted on Christmas in July. They saw instead a wonderful opportunity to draw these people towards them with not an either/or, but an and.

So between now and the middle of next week, we’ll celebrate the birth of Jesus and the Great horned God, the coming of the light and the coming of the Light. If you are Christian, you may even go to church, which will be festooned with evergreen, and then return home to presents under the Yule tree. And if you’re not, just look outside on the 21st of December, and wink at the Sun.

This time of the year is marked by seemingly divergent cultures striving to get along, and see each other’s point of view. While Nelson Mandela may be dead, his message is strong, that while forgiveness is hard, and must be done over and over again, it is a far better and bloodless path than the alternative. And that’s what I’ll be celebrating!

One thought on “Gut Yule! and the Spirit of Reconciliation”